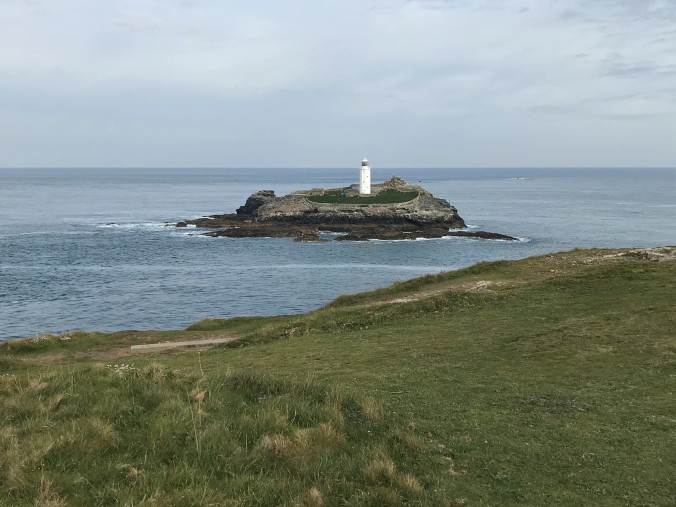 Back to Cornwall for a few more days of coast path, beginning where I began last time, a year or so ago (https://wordpress.com/post/womanwalkingblog.wordpress.com/6377).

Godrevy Point at the far end of Gwithian Sands was the spot but this time, instead of taking the Age Concern minibus to the start I had my own driver in the form of T who agreed to drop me off and meet me 7 miles later with such alacrity that I knew that a clandestine Full English had to figure in his plans somewhere. We actually reached the National Trust car park at practically the crack of dawn as we were both on city time when it came to waking up. But still the car park was hosting a good few surfers’ cars and vans.

Off I went in one direction and off went my husband in another.

I seem to have taken a great many And So We Say Goodbye shots of Godrevy lighthouse. I like this one best.

The National Trust own and manage the coast land here and, in that much of their work was imperceptible to me, and in that I very much appreciated their re routing of the path to allow for recent cliff falls, I did find some of their signage (and that of other charities) a little intrusive. 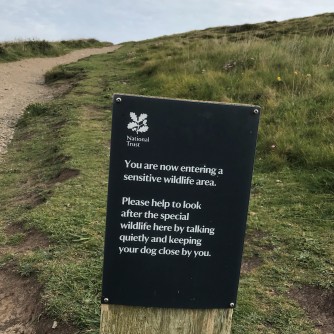 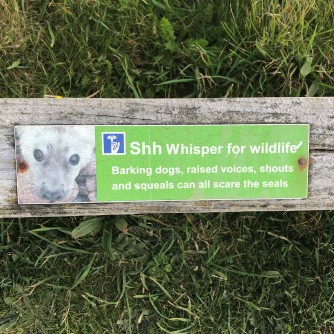 But it is a difficult balance to achieve and I have nothing against seals.

I thought I’d heard of excellent carrot cake being found on sale at the café hereabouts and I do love a piece of carrot cake. I hadn’t checked my sources too closely and so the first place I had my eye on turned out to be public toilets. Disappointing. In the fullness of time, at about the moment I walked off the edge of my very first OS map and onto the second (woohoo), I arrived at the café at Hell’s Mouth – the very place – but so early that it was yet to open and, to be honest, it was too early for cake, even for me. Still, I passed by with some regret but later, on rereading Jude’s post, I realised it may not have been so bad after all. (https://cornwallincolours.wordpress.com/2018/08/29/hells-mouth/).

I walked on as the way, although high up on the cliff,  ran flat and close to the road for several miles. Car parks popped up from time to time. It was turning into the least interesting section so far and I was growing rather fed up. It did give me time to reflect on my new walking/trail shoes and award them 9 out of 10.

Still not 100% right. The quest continues.

Lovely array of wildflowers along the way though – bluebells, primroses, violets, red campion and a whole load of nameless others. 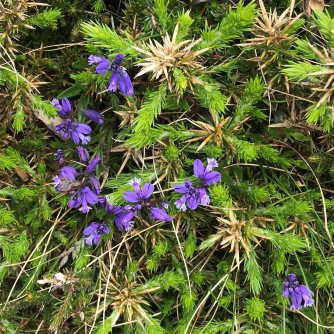 Just as my inner moaner was starting on the Are We Nearly There Yet? whining, the path dropped away, right from the top of the cliff to a few metres above the beach. 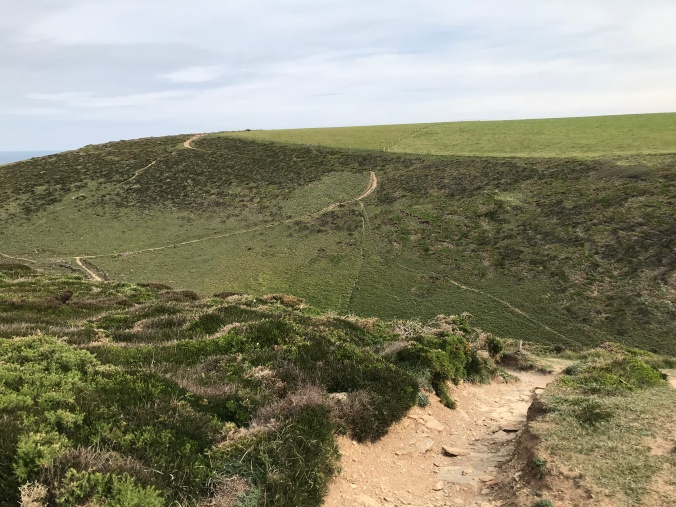 A steep down followed by a steep up. That’ll teach me to get bored. Just time to catch my breath at the top and WHAT? Here we go again, all the way down and all the way up again. A double dip. Not sporting. Not sporting at all.

Then it was around the headland and into Portreath, my morning’s destination. I have to admit that I found the place a little odd. Its raison d’etre was as a port used to export tin and copper from the local mines across to South Wales for processing and to import Welsh coal to power the mine machinery. As I saw a bit more I came to admire its plucky ingenuity. I mean, would you build a harbour here on this wide expanse of gently sloping sands?

At one side of the beach walls were constructed to create the narrowest of channels to form the harbour. The skill that must have been required to navigate that unfeasibly tight passage is extraordinary.

The village itself is rather unusual. Although equipped with the requisite golden sands (and some truly ugly, crassly overdeveloped properties), just behind the beach front car park is an estate of 1970s housing where the old maps show were once coal yards.

Throw in several derelict bungalows around which property developers must be circling, a couple of not very enticing pubs, a beach café reeking of chip fat

and a (much nicer) cycle café where we drank coffee amidst the frames and the inner tubes and it was all a bit of a mishmash.

I couldn’t wait to leave.

But what’s that giant golfball up on the hill above the village?

That’s for the next walk

9 thoughts on “To the lighthouse. Again.”