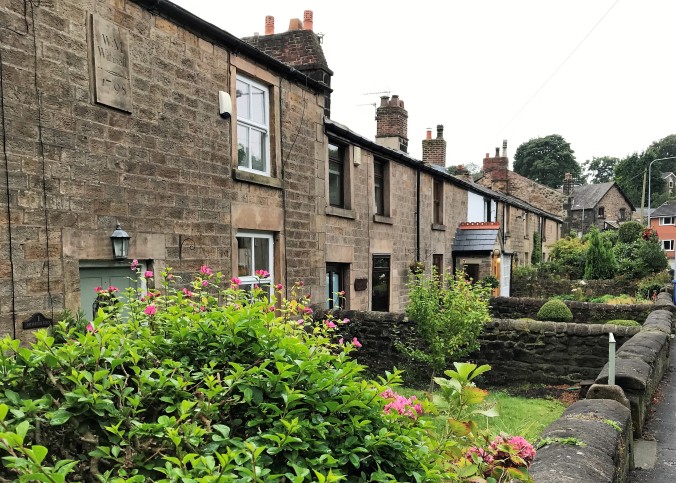 A quick trip up to Lancashire and an overnight stay in Whittle le Woods, an old village a couple of miles north of Chorley, now much enlarged by twentieth century development but rather pretty and public spirited. Spectacular – and lovingly tended – flower baskets sprout from lamp posts – even by the side of the road where no one was looking and the redundant phone box doubles as a book swap and defibrillator station. 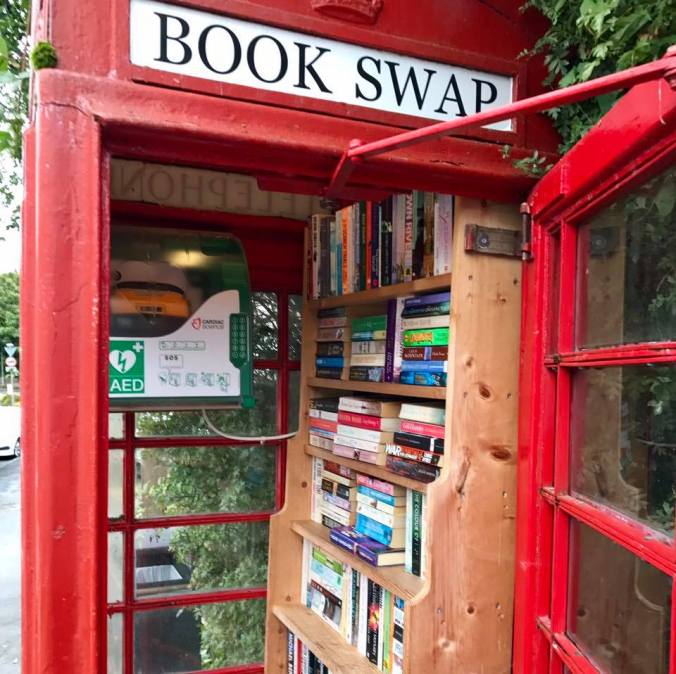 I was out early and so were the dog walkers. I asked a man with a black lab if I was on the right road for the canal. Which one? There are two? Was I to face an embarrassment of canal walking choice? Mind you, the Walton Summit’s only a couple of hundred metres long. You’ll see that one first then the main one. And so I did, hitting this last gasp of the Lancaster Canal at its forlorn end and following it down to the junction with the much more up together Leeds and Liverpool Canal. 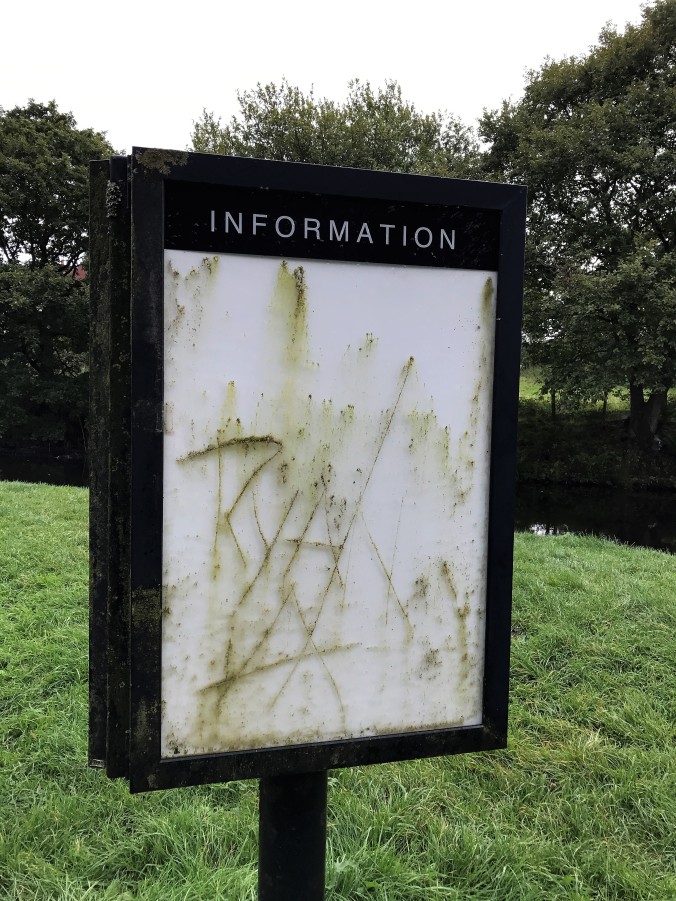 The Lancaster Canal. I’d like to tell you more 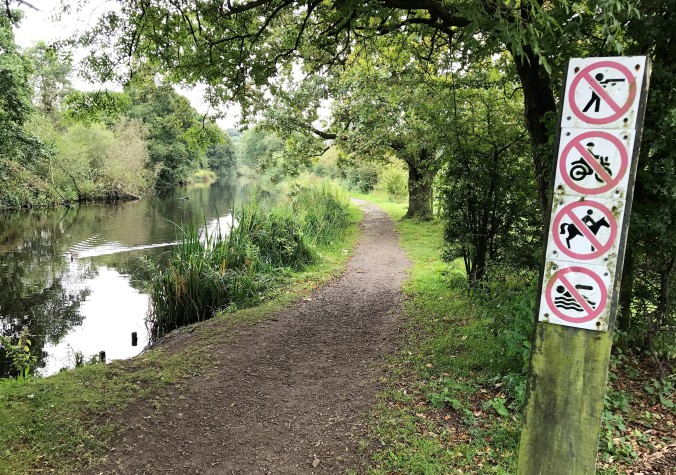 No motorbiking, no riding, and no swimming I get, but…

NO SHOOTING? I mean, they only put up notices banning something if it’s going on in the first place, don’t they? What on earth were miscreants shooting? And were all the genial locals  (It’s a grand day all right) walking amiable dogs (Don’t mind him, he’s as soft as putty) secretly packing? Hard to believe. But I dodged the bullets and added the notice to my Hall of Fame just a little shy of my all time favourite. 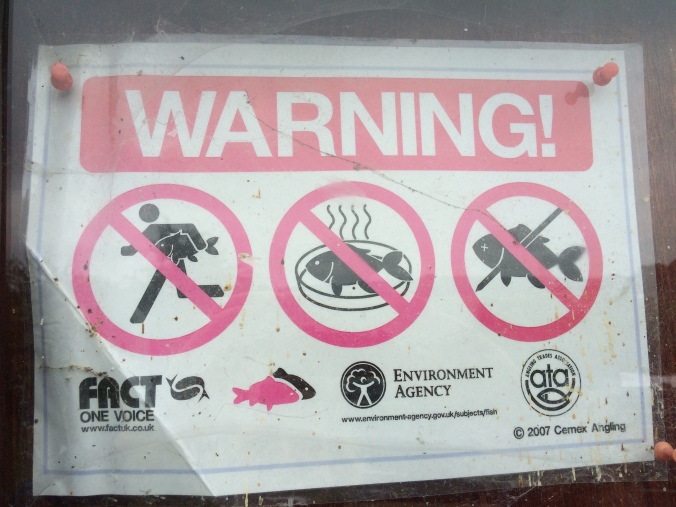 No pan frying, no kebabbing, and positively no doing a runner with a fish tucked under your arm. (Pewsey Wharf on the Kennet and Avon)

Over the defunct canal, on to the Leeds and Liverpool and immediately into the seven lock flight of Johnson’s Hillock (Cannot help but think that that must have a congestion blackspot back in the day with the merging of two major waterways, plus seven locks and a brewery thrown into the mix – http://maps.nls.uk/view/101102450). 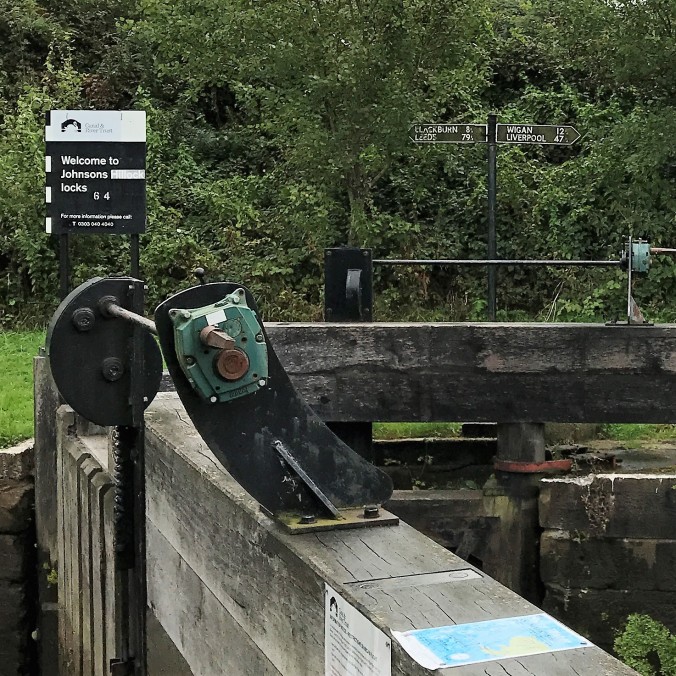 Revilo was just entering the bottom lock when I passed and leaving the top lock when I returned a couple of hours later. Otherwise nothing was moving on the water. 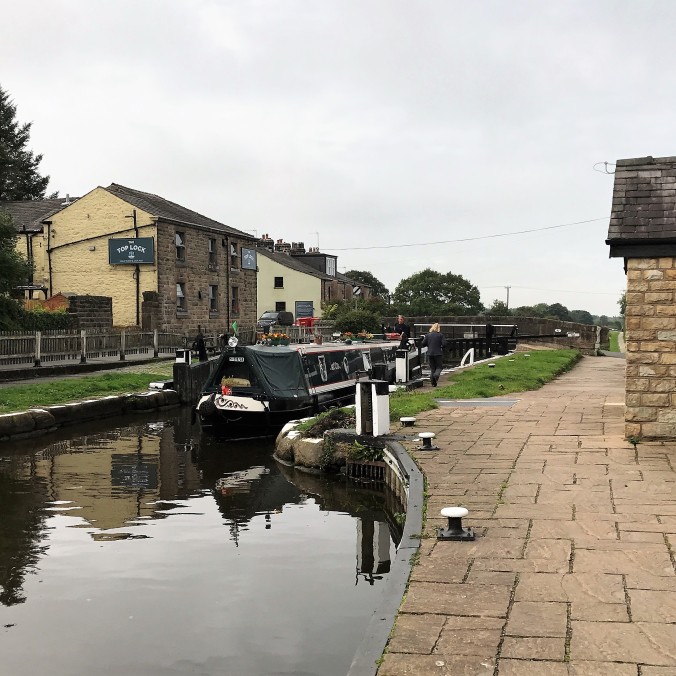 After surmounting the Johnson’s Hillock flight, Revilo‘s crew were looking forward a leisurely afternoon cruising uninterrupted water before tackling the flight at Blackburn next morning.

My aim was to get to Withnall Fold before turning back. I was walking by the clock, 1 1/2 hours out and 1 1/2 hours back to fit in with my lift, so I actually got a little further, out from the gently wooded valley into the flatter soft uplands. 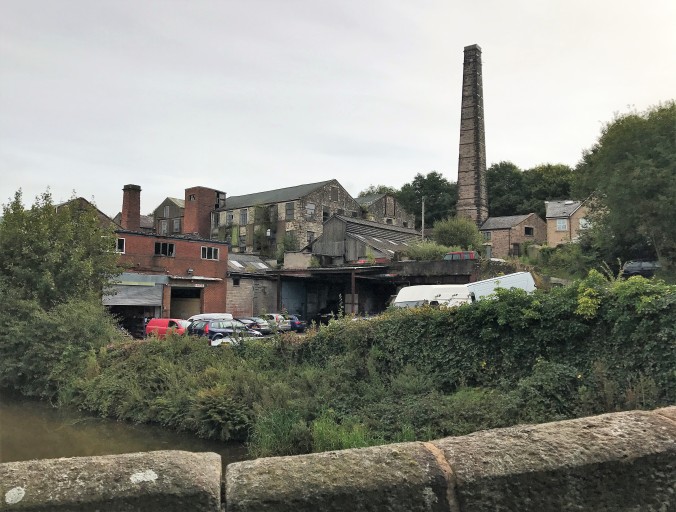 Withnall Fold, once a paper mill, now the home of various car mechanics and metal bashers.

It made for a pleasantly undemanding walk with time to admire the array of bridges with their almost perfect circular reflections in the still water. 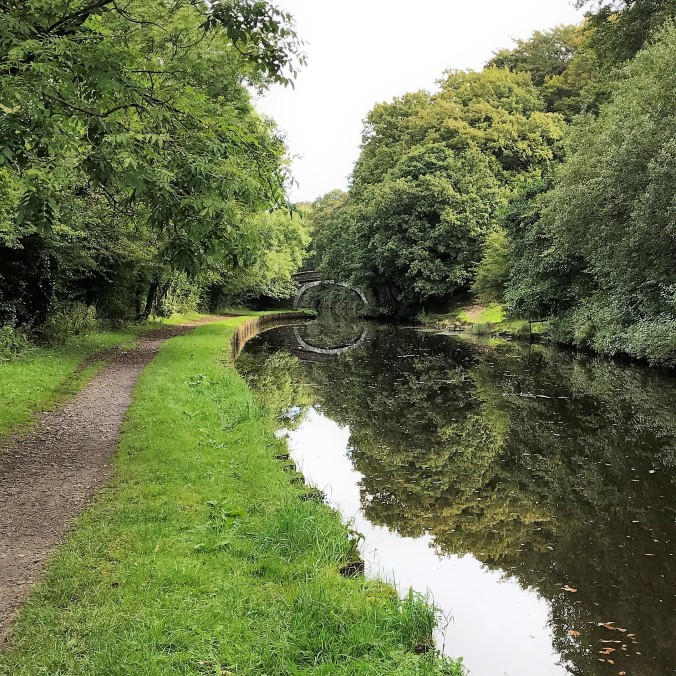 The changing leaves will be fabulous here in a few weeks

Interestingly most of these bridges connect only old byways or farmlands rather than present day roads. So when T rang to say he was ready to leave earlier than anticipated, I realised that I was a good half hour’s walk from the nearest vehicular access to the canal, back at the top lock. As luck would have it there was pub right there which not only served excellent coffee but also threw in large lumps of home made chocolate chip bedecked shortbread too. No hardship to wait with that on offer.

I began to wonder if there ever was an I Spy book of canal country? I could have raced through it if there was. You know the sort of thing, score five points for a sheep, tick, ten for a goat, tick, fifteen for a pheasant, tick, twenty for a brace of floppy eared bunnies, tick, and twenty five for matching cow and lock gate combo.

Thirty for some industrial heritage (chimneys tucked into a valley across the fields) and thirty five for canalside remnants. 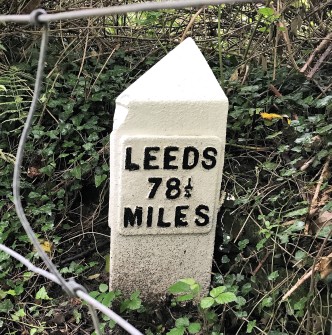 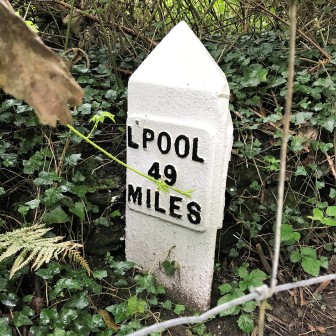 And on to the back page list of elusive things that no one ever bags. Score 500 for the pair of jogging Mormon missionaries who passed me twice (you’re not going to make many converts at that speed, boys) and – yes, I smashed it – 1000 points for the morose horse giving me the side eye. 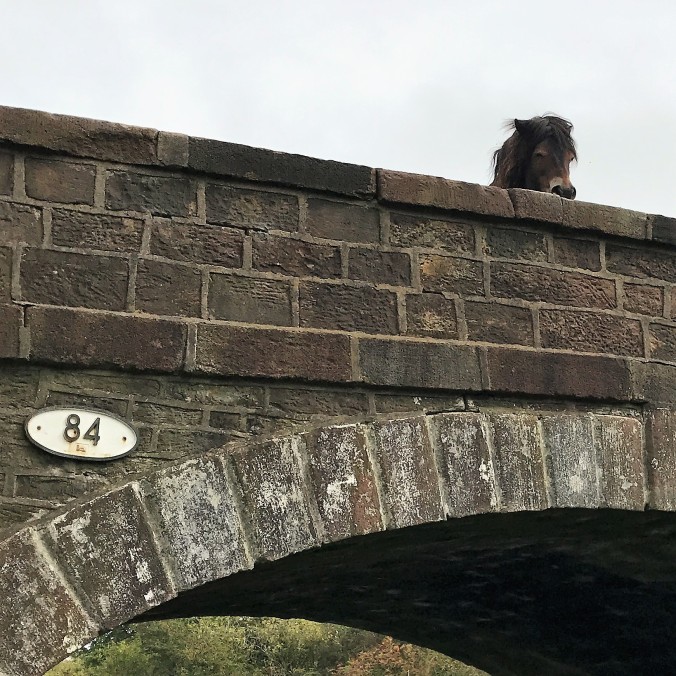 Gold stars all round.

Now I don’t actually have any dogs, and nor does my excellent friend, N, so this is a bit of a misnomer. But last week she was dog sitting a brace of them so I joined her for a couple of outings and became a dogwalker by association, as it were. I did not cover myself in glory as I failed to remember which was the boy and which the girl, but N had it all under control. Very firm is N. 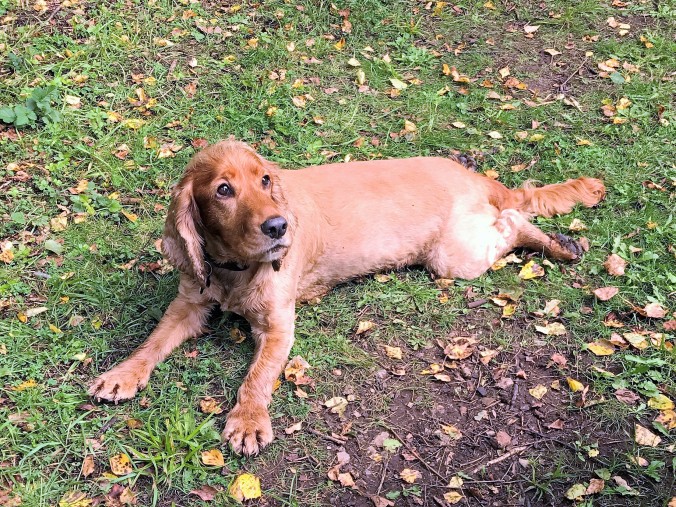 This is J who strikes me as a bit girly in the looks department. And in his frequent stops to strike a pose.

Walk 1 saw us meeting up in Winscombe in North Somerset and setting off along the Strawberry Line – a charmingly named railway side shoot turned cycle path which once carried the strawberries from Cheddar to the main line at Yatton for Bristol and beyond. I don’t know what was carried for the rest of the year but it’s a nice example of early destination marketing.

Now while there is almost nothing not to like about the repurposing of redundant rail lines into public access greenways, I have to admit that I find them mega tedious when it comes to walking along them. It’s not their fault – they were built to follow the straightest path along the flattest of terrain for obvious reasons. This make them excellent for running (if you must) and cycling (a delight to see whole families taking to two wheels to enjoy them) but a track that is flat and straight, taken at walking pace, makes for a dull outing.

Happily, N is splendid company so the miles passed easily. She’s also a great wonderer and, when we paused for a cup of coffee at a pub in Sandford, she looked up at a wooded ridge and wondered if there was a way of getting up to it. This was my cue to whip my map from my backpack and take a look. (Give me the slightest encouragement to consult a map and I’m there).  There was a path so off we went up Sandford Hill, cutting along drives and alongside back gardens and up into the woods.

Although we didn’t see a soul, it turned out to be an unheralded but obviously well used way through a rather glorious mixed wood. Every now and then signs of past quarrying could be seen. 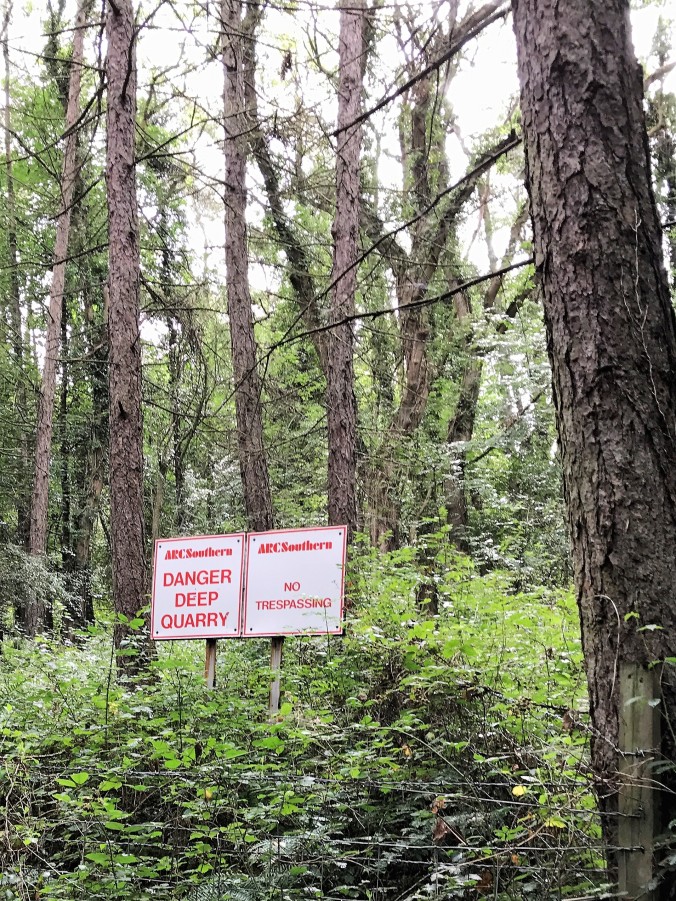 That sign’s been there a long time. The company changed names in 1989

Turning a corner we found ourselves on a track that didn’t appear to go to or from anywhere very much, but along which walkers were clearly anticipated. Thirsty ones too. 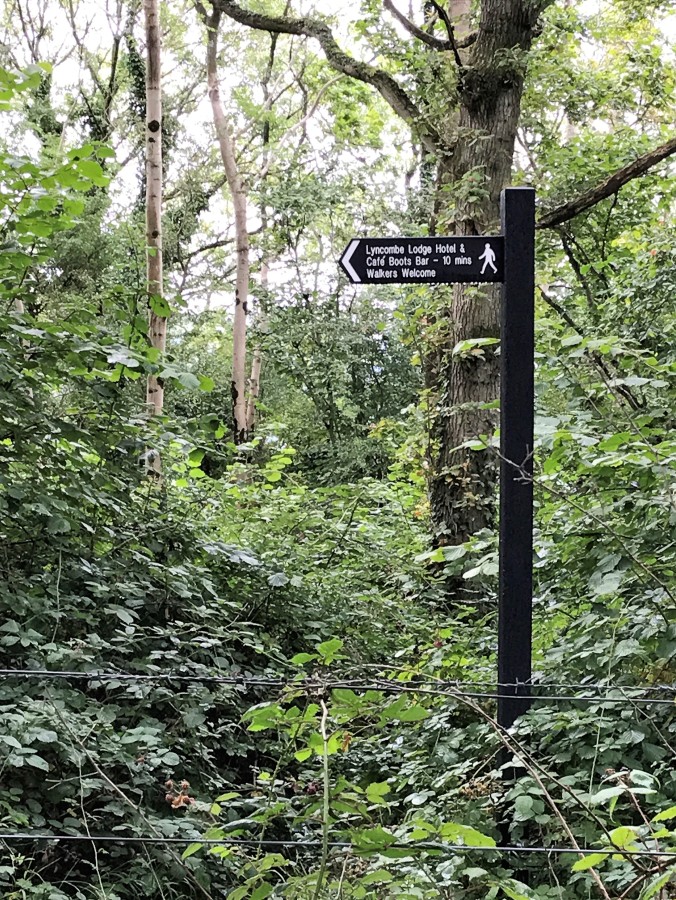 I mean, how often do you find yourself in the middle of a wood and stumble across a sign for a bar?

Verdict on Sandford Hill?  Not somewhere to put on your must-see list but a fine example of the quietly lovely spots to be found all around us when we follow our noses. 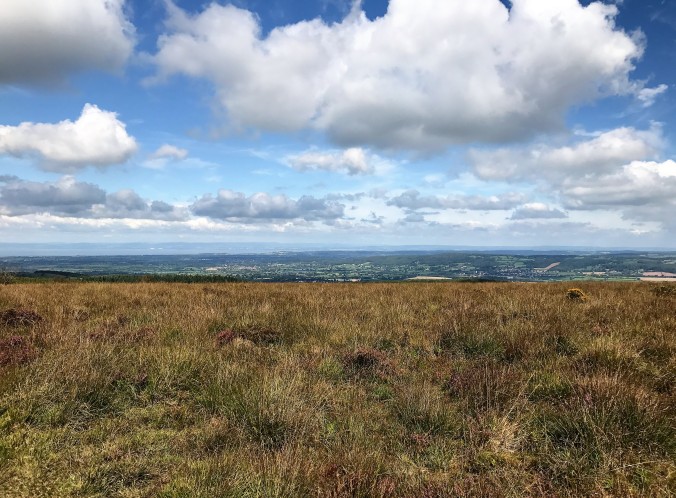 Looking north from Black Down towards the Welsh coast, the Wye Valley, and Bristol

Walk 2 began at Burrington, not so far from Sandford. Although just a few miles east along the Mendip hills, the landscape was strikingly different – no wooded ridge here, just the wild open moors of Black Down with glorious views in all directions, down to the Quantocks, over to Wales, up to Bristol and across towards Bath. 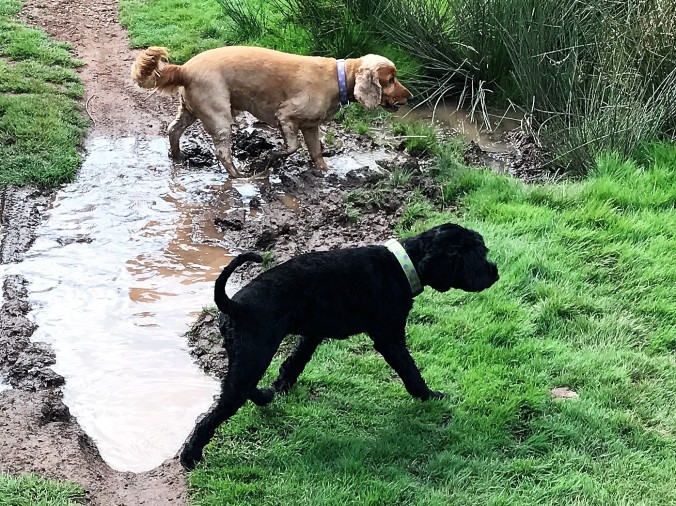 While the dogs jumped into every muddy puddle they could find, I burbled on about how unspoilt it all was, unchanged for centuries etc etc. N was too polite to disagree. Then we came upon this, 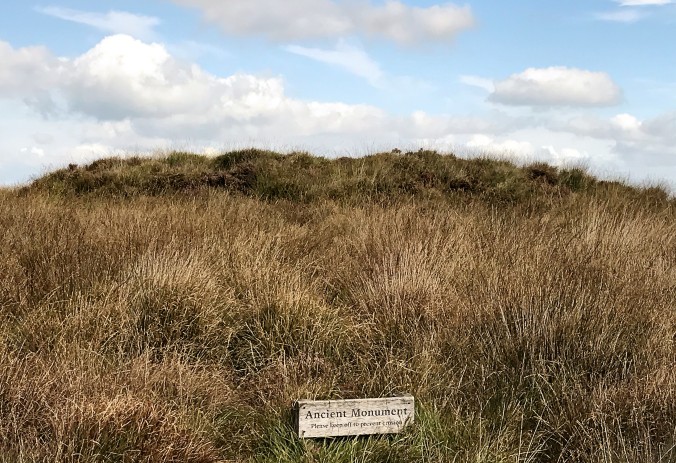 Ancient Monument.  That’s all there is. Anyone’s guess as to what it’s all about but clearly people have been this way before us. 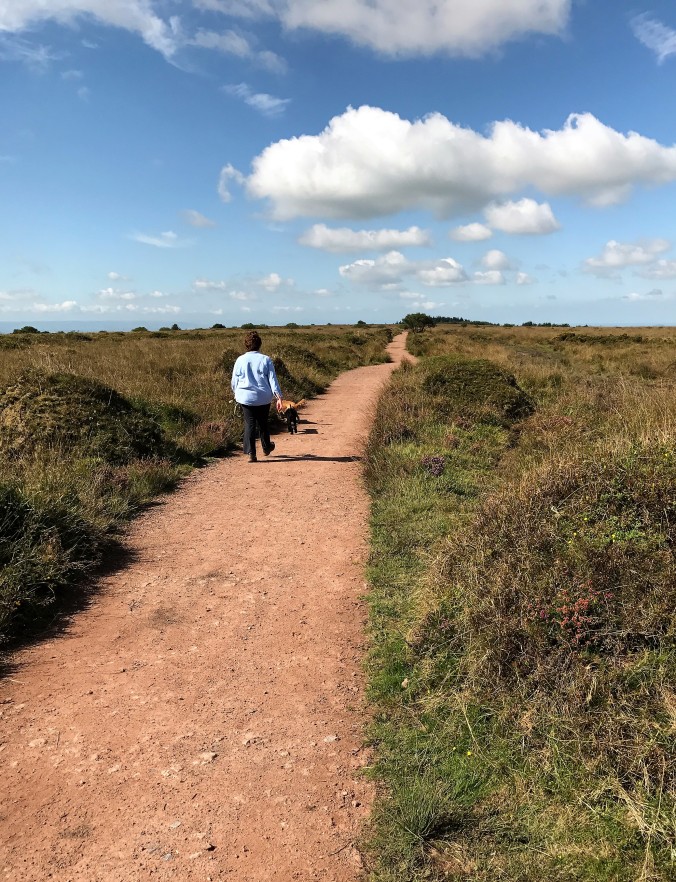 See those mounds regularly spaced on each side of the track?

N tactfully explained that far from being au naturel this area was heavily modified in the War. A whole network of lights and what have you was set up in a bid to fool enemy aircraft into attacking a decoy city here in the middle of nowhere, rather than the real Bristol 15 miles north. These small hummocks are remnants of this extensive defensive apparatus – either they were built to prevent invading planes landing on this otherwise flat top, or they were the bases of the runway lights of the ersatz Bristol airfield.

And as we dropped down into a steep sided valley, even I could see the hand of the Forestry Commission at work in the regimented planting of the conifers. But bracken, that’s natural isn’t it? Nothing cultivated about those ferny fronds, is there? 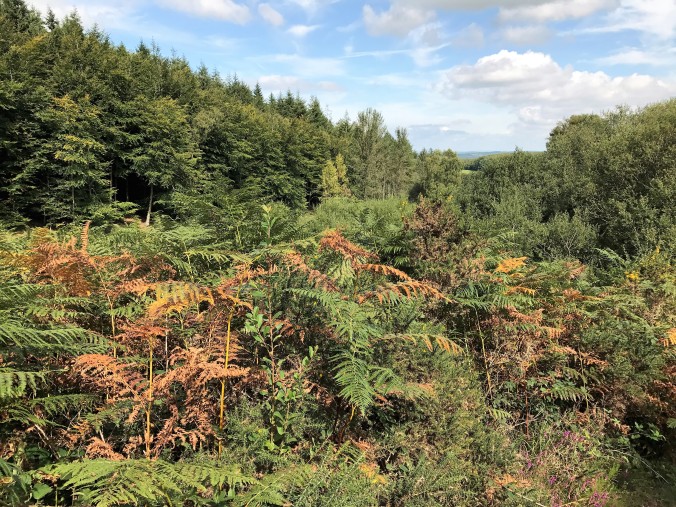 Well, yes and no. It may grow wild but hereabouts they harvest it commercially for fuel. Here’s how the Mendips website explains it – ‘Through a simple yet ingenious process the harvested bracken is shredded, dried, shredded a bit more and dried a lot more. It’s then compacted under huge pressure… shunting down a line to be cut into ‘brackettes’, bagged up and distributed to 120 outlets around the country to burn on home fires.’ (http://www.mendiphillsaonb.org.uk/2017/06/07/brackenburn-a-growing-success-story/) 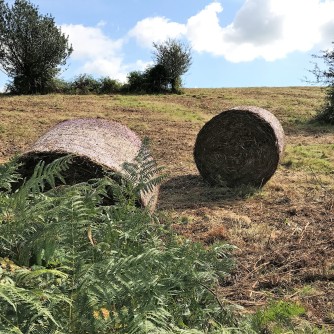 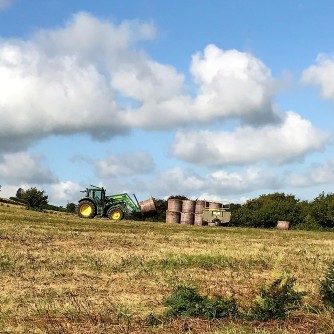 So all of this, far from being a wilderness on the doorstep, is actually a highly cultivated space. But what a good job is being made of it. And while neither of these walks are ones you’d cross the country (or even the county) to reach, these hours of talking the walk with N were treats indeed.

(And – bonus treat – I went home with the makings of a blackberry crumble from the wild brambles that are left in abundance. I’ll just whisper that I had to carry the berries in a spare dog poo bag that the ever organised N had in her pocket. IT WAS UNUSED, OK? But still faintly distressing)