When it’s come to walking these past months, torpid has been my leitmotif.

I decided to run a marathon. 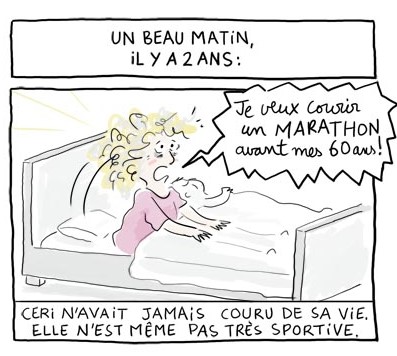 The very talented artist, Eglantine Chesneau, was commissioned to illustrate the marathon stories of a dozen first time marathon runners and very kindly chose me. (http://eglantinechesneau.ultra-book.com/accueil)

I ran in the dark 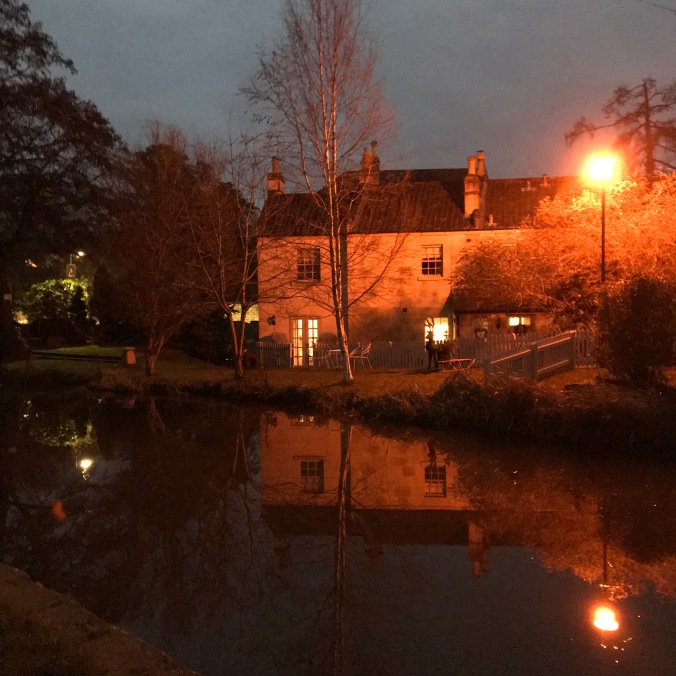 and I ran in the light, 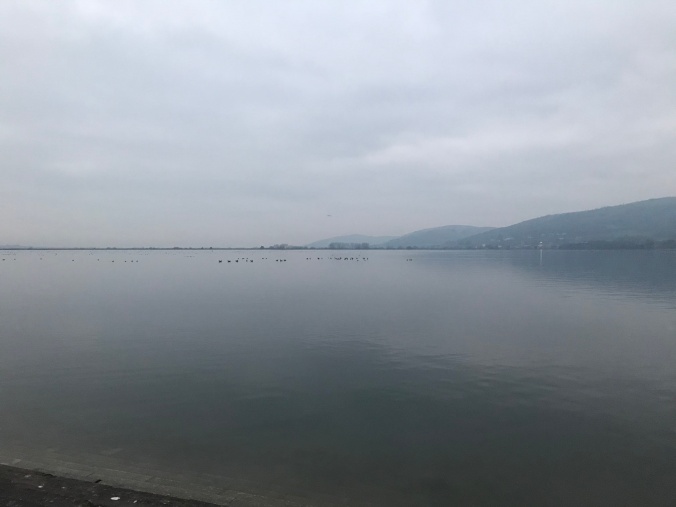 when the sun was coming up 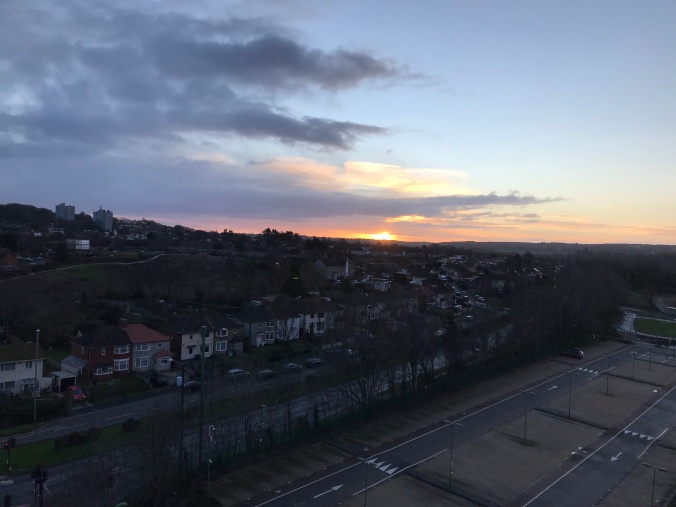 and when the sun was going down,

when the waters were rising

and when the floods had subsided.

I ran through a vicious hail storm, soaked to the skin with icy water, when the rough, narrow canalside path turned to slippery mud

and I ran through the strong spring sunshine which burned my nose.

I ran with my wingwoman daughter

and I ran alone,

through scenes of great beauty

and some not so great. 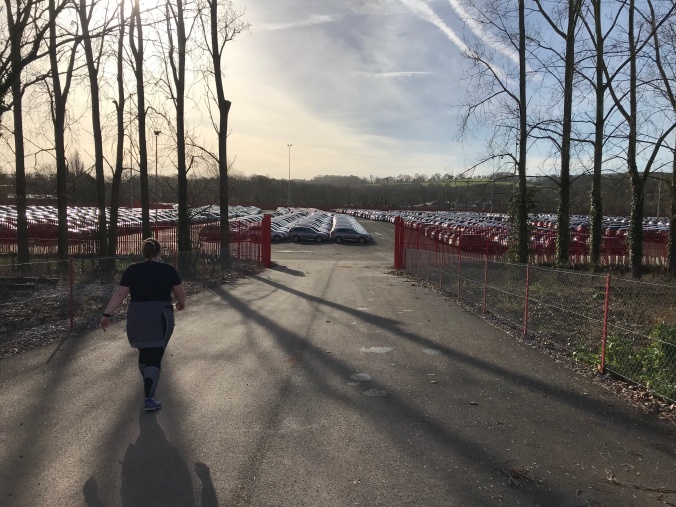 and I ran across every bridge I could find in Bristol (and still missed a few). 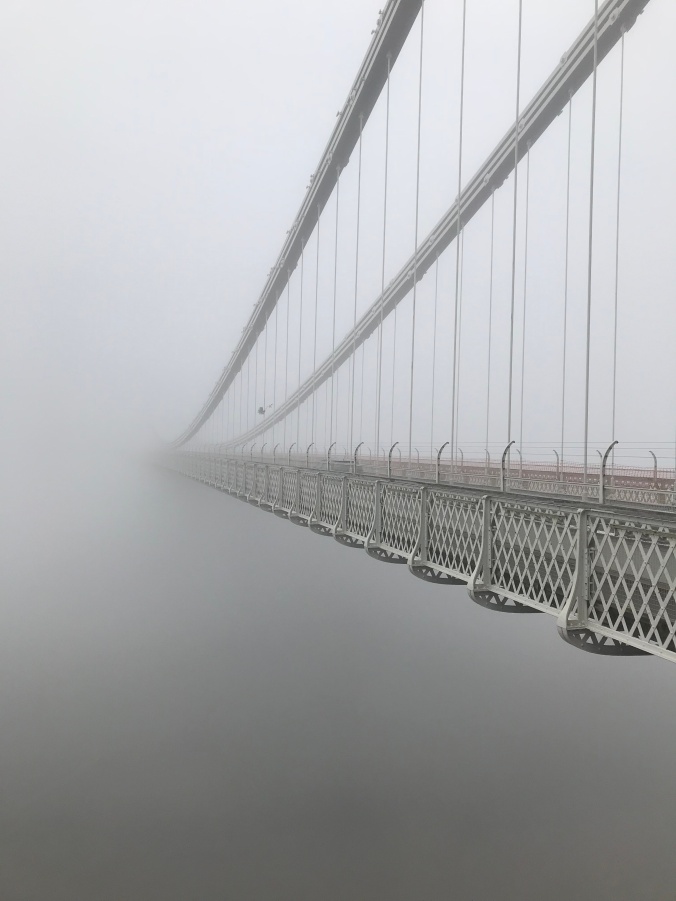 And then I pinned on my number 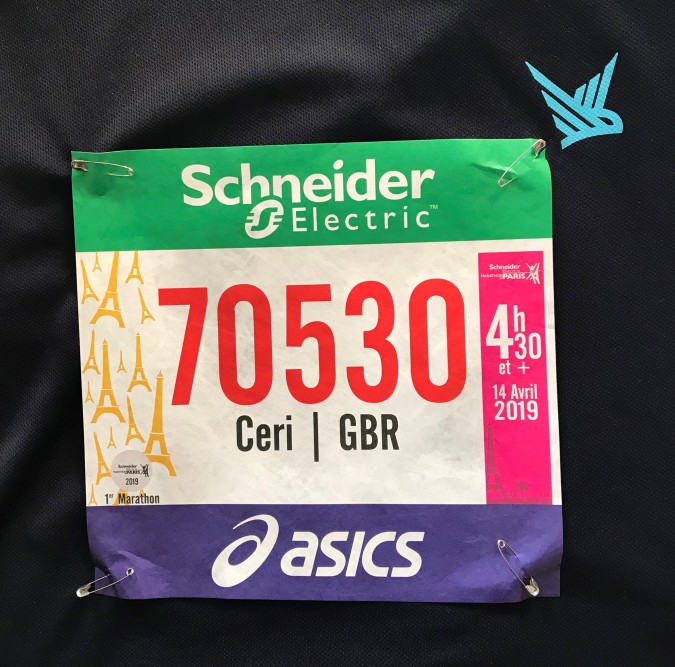 and I was away.

Back to an old favourite walk. The canal side path between Bath and Bradford on Avon passes through some of the most gently beautiful scenery around. Nothing spectacular – no astounding gorges or towering peaks – just ten miles of quiet walking loveliness, with the added bonus of a station at each end for the return trip through the same valley but seen from a different angle.

This time I started halfway along at Brassknocker Basin,  between Monkton Combe and Limpley Stoke (Who could resist?). There’s a café there, a boat place, a small exhibition and a canal that disappears into a cupboard.

It’s behind those blue doors

OK, so I have seen what lies behind the doors but I can tell you that it’s nothing much. From here to its junction with the Kennet & Avon is what remains of the Somerset Coal Canal, less than half a mile long, but a popular spot for a stroll, not least because of what lies at the junction of the two waterways.

The River Avon beneath the Dundas Aqueduct

It’s an aqueduct – the Dundas Aqueduct (1797 – 1805) to be precise – and mighty fine it is too, even if it is impossible to photograph it in any way that conveys the strangeness of walking next to water many feet above the river flowing below. Last time I was here, I was emboldened by the excellent A and we clambered down the bank to take a look at it from below. 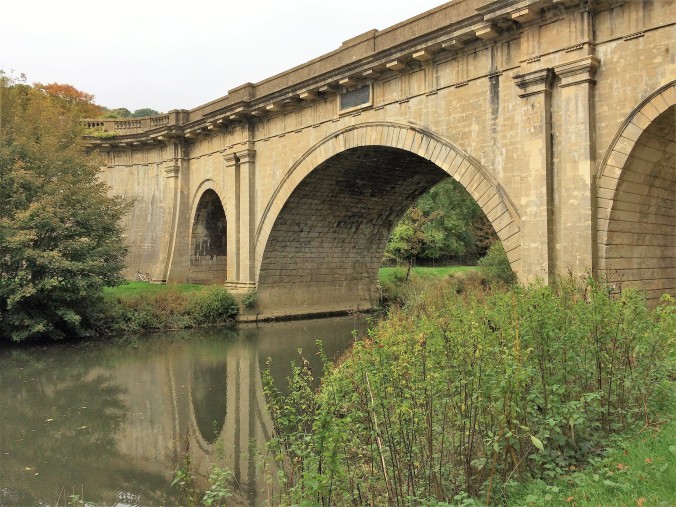 The Dundas Aqueduct in October 2015. Happily, when they invented the steam engine there was a spare archway all ready for the railway line.

Then I spotted the mason’s marks. And once you see one, you cannot stop seeing them. They’re everywhere. As I understand it, these are the marks stonemasons used to identify their work so that they could be paid, but they were usually placed on the back of the block and thus hidden (I got this from http://www.masonslivery.org/supporting-our-craft/masons-marks/for work. It’s an interesting read, especially the initiative to encourage present day masons to register their marks)

So why are they face on here? Could it be that these early 19th century masons recognised the nascent talent of John Rennie, the civil engineer in charge, and sought to associate their work with his? Or were they just an unruly bunch who wanted to do things their way? History does not relate. Either way, can you not imagine the elbowing aside and jockeying for position that must have been required for the man who got his stone into the prime spot in the centre of the parapet?

After the aqueduct, the canal clings to the side of the hill, with sharp drops to one side and steep wooded cliffs to the other. Protected from the wind, if nothing is moving along the canal, then the water returns to a mirror like calm. 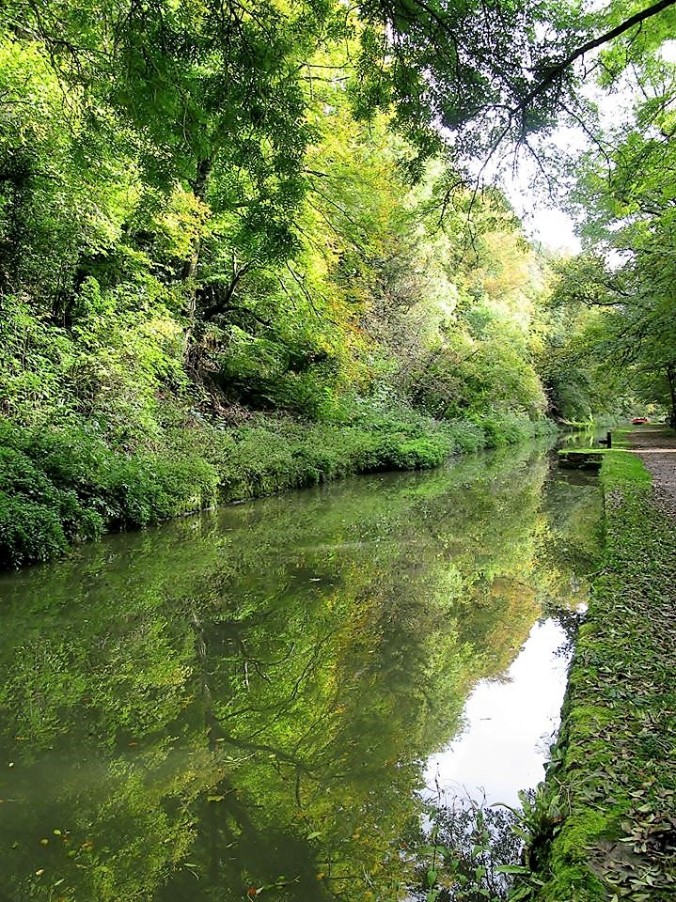 Every now and then a view opens up

Or an interesting boat goes by. Or a dog walker stops to chat. Or the waft of wild garlic becomes impossible to resist (those flowers are STRONG – who knew?). There’s another aqueduct at Avoncliff, which somehow negotiates the presence of a (retrofitted) railway station, but basically there is very little going on here and that is its charm. The world can be put to rights or reveries sunk into without interruption.

And then just when you are beginning to run out of deep and meaningful thoughts, there is Bradford on Avon. It’s a pretty town with a flower bedecked station and I keep meaning to take a good look round. But this time I headed for the lock amidst the remnants of a canal basin and to the Canals and Rivers Trust café there, run by the most delightful of men and stocked with the products of the dabbest cake baking hand. It sits within a charming garden which, he told me, is all the work of a dedicated team of CRT volunteers. Every year we win Bradford in Bloom, so now no one else enters. 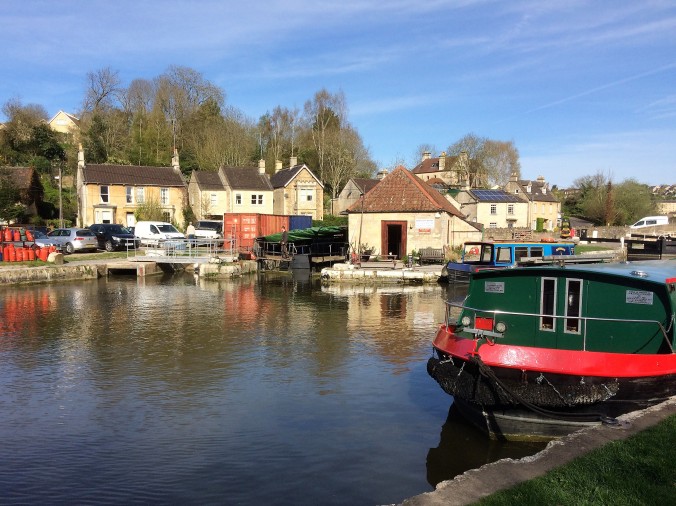 Bradford on Avon canal basin. The lock is over to the right.

The Easter holidays and the unexpectedly bright sunshine had brought people out so it was a busy spot in which to drink tea and watch the world go by. Comparing notes with a chatty woman on a bike, we managed to cover a range of topics in short order – paid work, Year 7 maths, middle aged men, sugar,  teenage girls, bosoms, cycling, the weather, and the trials of a big bottom –  before she leapt onto the saddle and zoomed off, enjoined by me to look out for Jelly Bean.

I’m not a fan of linear walks so I’m always keen to hop onto a bus, a train or whatever for the return if there’s no circular option. So you can imagine how excited I was to hear that the excellent G has become the resident owner of a narrow boat which, being in need of a touch of remedial work, she was single handedly bringing down from London to a boatyard near Bristol. And would I like to jump aboard for a stretch?

Our rendezvous worked out perfectly other than for an unfortunate incident when I, eyes peeled for a (previously unseen) red boat, enthusiastically hailed a rather startled man who – to add to the confusion – thought I was trying to prevent him accessing the water point. Sorry, I mistook you for Jelly Bean was a line sure to be misinterpreted. Happily all was smoothed out as G came round the bend at the helm of the aforementioned vessel and he and she went down through the lock together, while I faffed about winding up things and opening gates (which is exactly where a big bottom comes in handy) and was swiftly relieved of my duties by an eager chap from a boat waiting to come up. Good.

Chugging back to where I had started took longer afloat than afoot, but there was much  news to be caught up and regular pauses in which G leapt ashore with a rope to adroitly manoeuvre Jelly Bean out of the way of oncoming boat hirers with rabbit in the headlights expressions. (But then you should have seen my face when left alone on the boat, engine running, without a clue. B, the ship’s dog, was more use than me).

Back eventually to the Dundas Aqueduct where I hopped off and G, B and Jelly Bean carried on to Bath to moor up for the night. Tea and ice cream may have featured at this point. G could count it as part of her pre-marathon carb loading eating plan; I could make no such claim.

Just look at these fine fellows.

Photo found in the attic – who, when and where lost in the mists of time.

What dapper chaps they are in their highly polished Sunday best, straw boaters at a jaunty angle, a flower carelessly thrust through a buttonhole, and a placid dog persuaded to join the party. What fun they would be to meet along the way.

After the solitude of the mountains, time for the camaraderie of the camino.

Walking with a group of friends (strangers, even) is a delight. This past summer, a gang of pals and I enjoyed leisurely canal side excursions as our company of six – with the occasional appearance of a husband or two – strolled the Kennet & Avon from start to finish. Frequently we were asked if we were doing it for some charitable endeavour. Were we being sponsored and did we need our certificates signing? Er, no. But thanks all the same though. Were we twitchers or naturalists perhaps?  Well, some of us do know one end of a pair of binoculars from the other (not me, alas), and yes, it was a joy to see the ducklings growing and the crops ripening as we passed along. But actually it was a whole lot simpler than this.

We were just out for a walk.

And maybe a cup of tea.

But mainly we were there for the talk. Time slows when we walk. Minds wander. We have the chance to have all those conversations there’s never quite room for in the usual way of things. We get caught up with all the news, share the worries, hear the stories, make the plans.

And laugh. A lot.

At those things intended for amusement 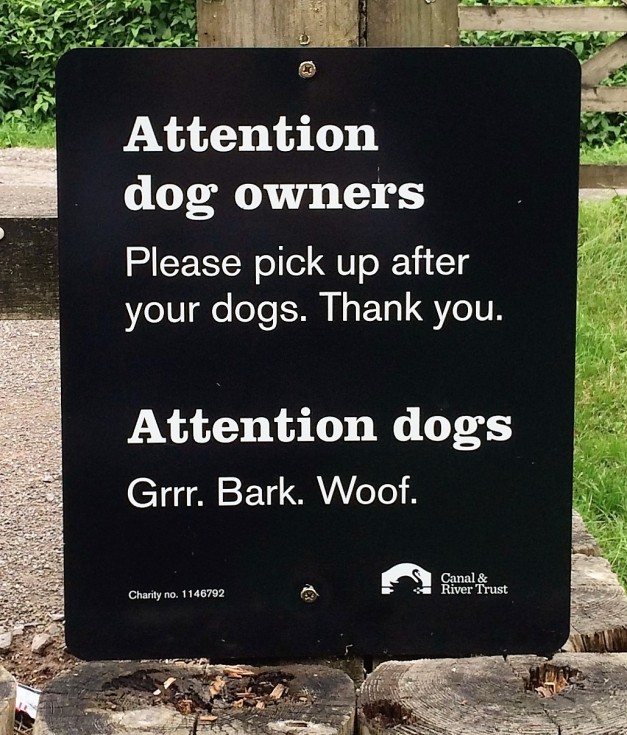 and those things which shouldn’t make us laugh but somehow catch us unawares (A tunnel named Bruce? Really?)

but most especially at the misunderstandings and mis-speaks, the You Had To Be There moments which those who weren’t, no matter how carefully you explain, never quite get. (Don’t worry – I’ll spare you).

A canal path is absolutely tip top for a talking walk. No need for anyone to break up the conversation to put her head in a map because as long as we all remain two paces from getting  wet, we can be sure that we’re on the right track. So with the vote cast in favour of the Kennet & Avon,  only one question remained. 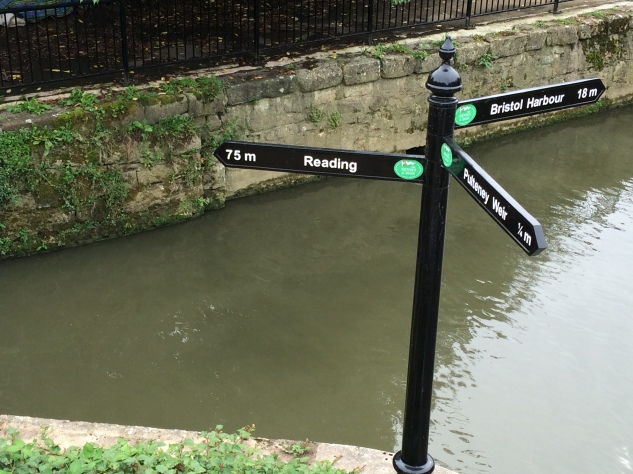 Which way to walk? Did we want to end our great trek in the World Heritage Site that is Bath? Or at the gasworks?

We started at the gasworks.

Reading’s an odd place. I lived there for some years as a child and remember it as a town of  worthy Victorian redbrick  endeavour, where you could tell which way the wind was blowing by whether you could smell biscuits baking or beer brewing. 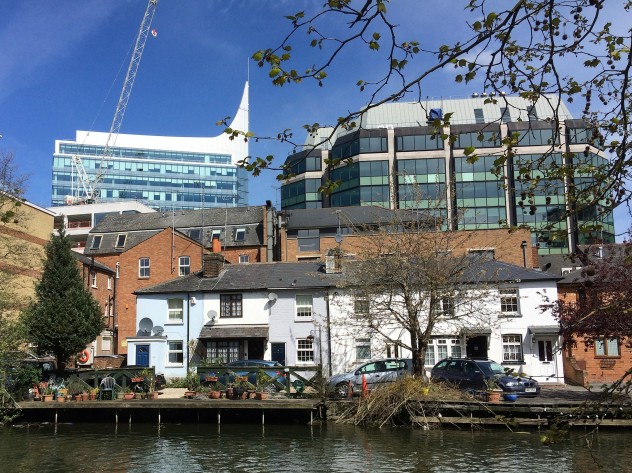 Nowadays it’s gone all satellite city, full  of throw up and blow down architecture. I barely recognised the place. But I did find one vestige of glorious Victoriana

Just look at the decorative brickwork on these canalside terraces. Isn’t it fabulous?

In terms of walking, although the canal did provide a corridor of green, its urban environs were never very far from view at first.

Not until we got beyond Newbury did we begin to feel that we had escaped the city and moved into a land of absolute delight. Of blossom

and scenes that came straight from old Ladybird books

and peaceful chugging along. 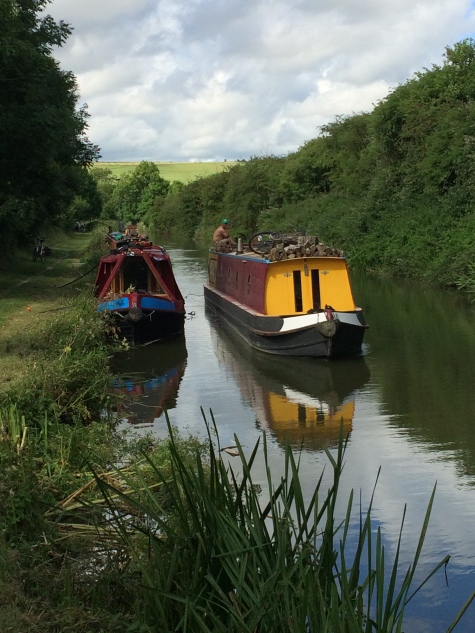 We debated the merits of waterborne gardens, from the decorative

to the ingeniously low maintenance. 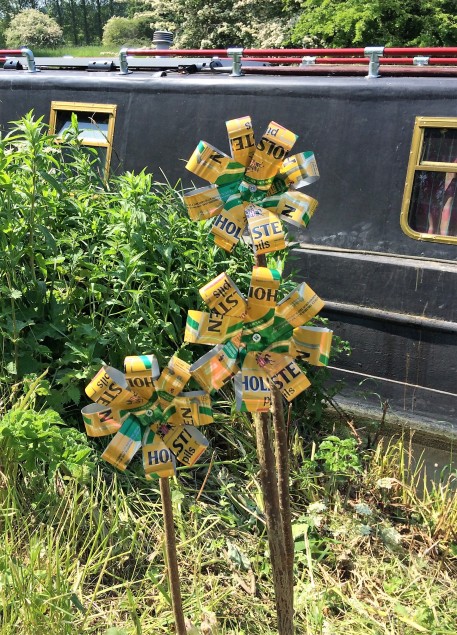 And we chose our fantasy moorings. Maybe a place in Devizes?

Or this one in Bath?

Never did find out what Fame Free Diesel is though.

All in all, over the course of the summer we spent nine happy days along the canal. That’s way too much to fit into one post,

but perhaps this scene of quiet companionship will sum it up…